ATARAXIA TOO GOOD TO BE CALLED ANGUS:

In 2013 we were given the chance to ship over another puppy from Australia,this time it was a success story and in early 2014 over came our beautiful boy Chieftain,this was part of a return favour for us sending a male out to Australia in 2010.Al details on exporting him from Australia were completed by the breeder,he arrived when they said he would and he turned out to be a magnificent animal,with amazing health scores and temperament,in fact he has won highest appraised male in UK at a Boerboel UK appraisal and last year in 2019 he won best conditioned Boerboel,a worthy win!! Here is a dog that sets the perfect example of not being told the truth by the breeder about what he potentially carries and will breed down through his genetics,we discovered,(prior to our take up of the full DNA profiling we now do on all of our breeding dogs),on producing a litter that he carried both the dilute and the liver nose gene-not a problem normally-until he meets another dilute and liver nose carrier in the mating.............it was a steep learning curve for us and why we now always recommend the full DNA test by MyDogDNA in Finland.
This fantastic muscle bound athlete now lives with our friends and has a super life being spoiled rotten! 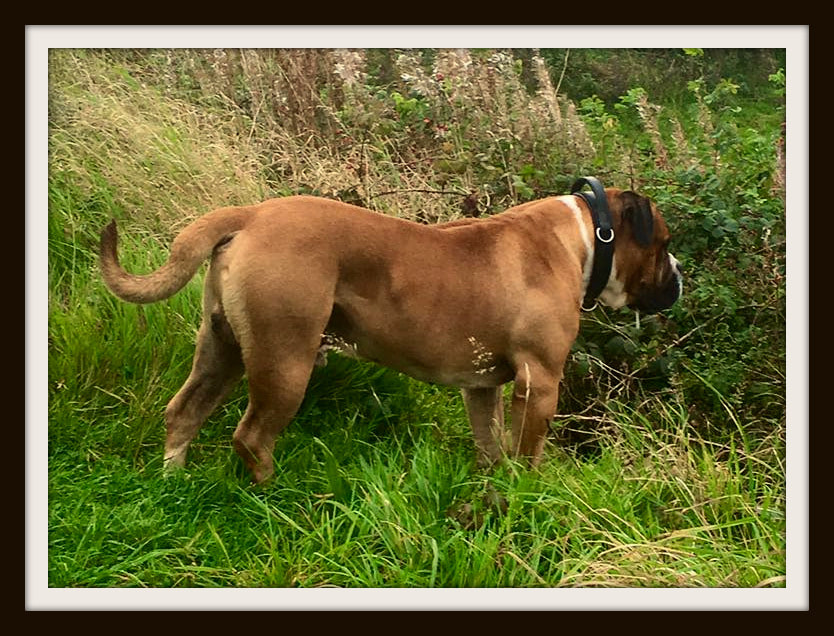